The Elections Research Center has made data from the Wisconsin Advertising Project (WiscAds) available electronically for academic use for a nominal fee.

From 1996 to 2008, WiscAds conducted research investigating how candidates, political parties, and special interest groups communicate with voters. Initially, WiscAds studied campaign television advertisements in the nation’s 75 largest media markets by collecting and analyzing all political advertisements aired on broadcast and cable stations. The scope of the project increased over time, eventually gathering data on all 210 media markets in the United States. This unique database has been made possible through a technology developed by the Campaign Media Analysis Group (CMAG).

Inquiries about ad data for elections from 2010 forward should be addressed to the Wesleyan Media Project.

Use of data from later years requires researchers to agree to certain terms and conditions. A small fee ($20 for each election year) is required to cover administrative expenses.

To purchase access, please click the link below and agree to the terms of the data use agreements. After completing the transaction, you will receive an email with instructions concerning how to download the files.

What Files Are Included? 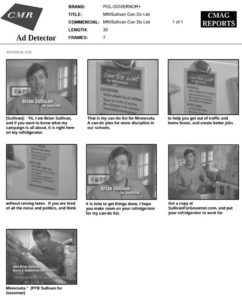 All datasets for elections 2000-2008 are provided in SPSS and Stata formats. Storyboards of all creatives are also provided as PDFs.

The 2004 data covers Presidential, U.S. Senate, U.S. House, and Gubernatorial elections within the 100 largest DMAs in the United States during 2003 and 2004.

The 2008 data covers Presidential, U.S. Senate, U.S. House, and Gubernatorial elections within all 210 media markets in the United States during 2007 and 2008.