The Elections Research Center conducted surveys in Michigan, Pennsylvania, and Wisconsin between July 27 and August 6, 2020. The surveys asked voting-age citizens who they plan to vote for in the general election. Among other items, the survey also asked respondents about their reasons for supporting the candidates and opinions about President Trump’s handling of the coronavirus pandemic and protests over policing.

The surveys reveal that Vice President Joe Biden has a solid lead over President Trump across all three battleground states.

Biden’s advantage is largely the result of consolidating the Democratic vote and attracting support from voters who supported minor party candidates or did not vote in 2016.

Since February, previously undecided voters have shifted in Biden’s direction, and views surrounding Trump’s handling of both the coronavirus and protests over policing are closely tied to vote choice.

Trump’s struggle is partly due to his weaker position among white voters than was seen in his victory four years ago. 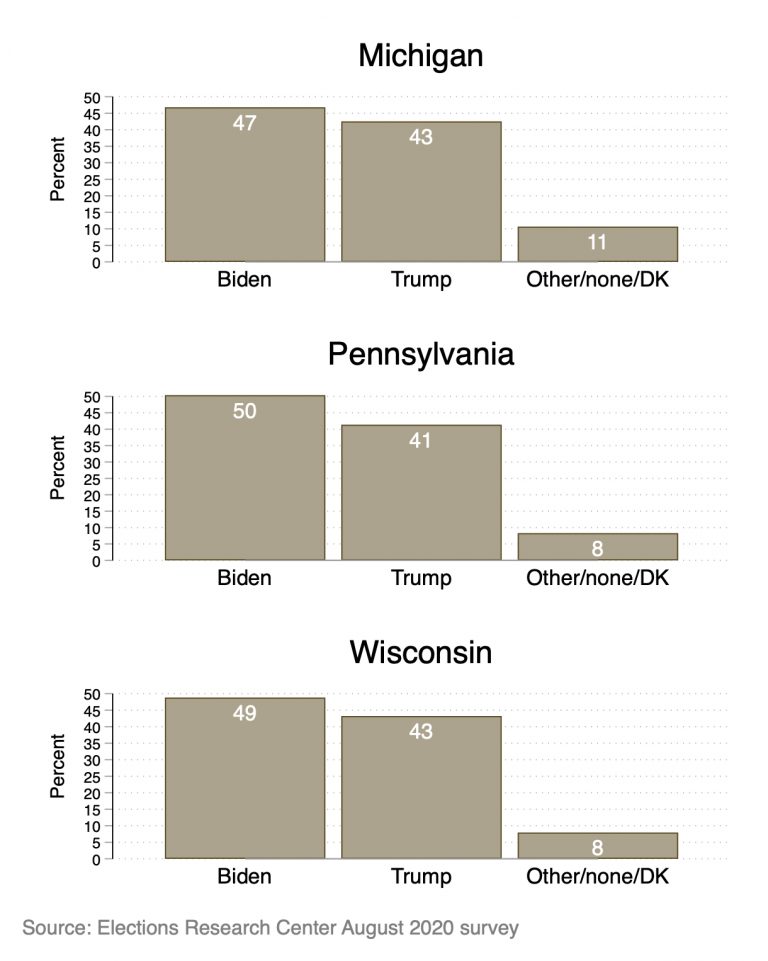 Among registered voters, Biden has a commanding lead in Pennsylvania, but a smaller lead in Michigan and Wisconsin.

His lead is even larger when limiting the analysis to only registered voters who say they are “certain” to vote. Among them, Biden leads by five points in Michigan, ten points in Pennsylvania, and eight points in Wisconsin.

Other results are available in our press release or in our detailed crosstabs.

The samples of 800 in each state were selected and weighted to reflect the adult population in the state based on gender, age, and education. The margin of error in each state sample ranges between plus or minus 4 to 5 percentage points.